Stop-Line Detectors: How Scotland’s Roads are Benefiting from Radar 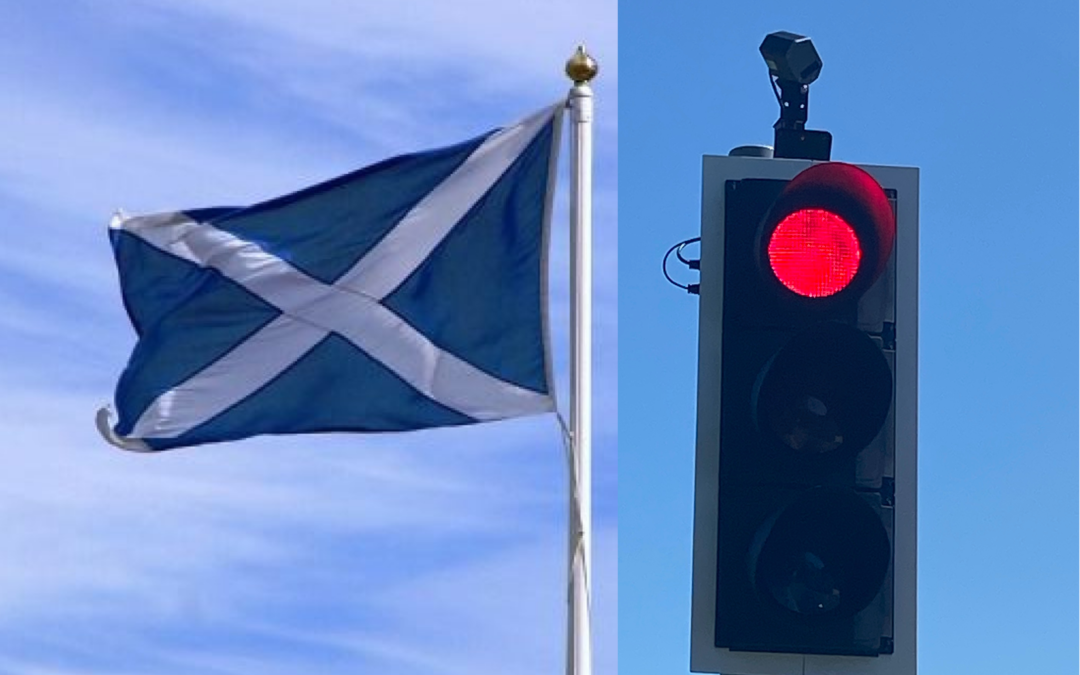 Both installations were carried out by Dynniq following a series of replacements for failing or inadequate detection systems around the country over the past 2 years. The first example is a busy 3-way urban intersection in the centre of Kilwinning at the A737, as it loops around the location of Ayrshire College. With a dual lane on two approaches and single lane on one, the junction was experiencing traffic queuing issues at the signals and required a rapid solution to get the junction functioning again.

A newly installed SCOOT system had been designed without a stop-line detector and a conventional resolution would have required new ducting work and re-configuration with a new loop system. An alternative, more cost-effective and swifter solution was found by replacing the existing MVD units, which were unable to detect stopped or slow-moving traffic, with the TMA-122. The radar detection kit was simply ‘plugged-in’ and configured, enabling the intersection to flow effectively again. According to Brian McKenzie, the operator at Dynniq who installed the unit told us ‘the whole process of replacement literally took 20 minutes!’

On another, three-way intersection on the outskirts of Newton Mearns, the TMA-122 was required to replace the existing surface mounted stop line detectors that were failing due to interference issues.  A quick and easy installation with the TMA-122 has delivered a reliable and effective solution for this junction.

As an increasing number of this new generation of detectors are installed, their reliability is being tested and proven. Through daylight, dusk and night, and all-weather conditions, including frost, snow and fog, they have been shown to maintain performance. Their capability in detecting a full range of vehicles, cyclists and even E-scooters has now also been proven, with a growing number of units installed throughout Scotland over the past 2 years that have required little or no maintenance.

An ideal solution for failed junctions

As the UK agent for the Icoms TMA-122, C&T Technology are finding that demand is growing, not only as a rapid and longer-term cost-effective alternative, but also as a less disruptive solution for failed XYZ loop detection systems.  For traffic management operators tasked with maintenance and repair of existing systems, installing this technology is becoming so effective that the viability of alternative repair approaches is diminishing.

So how does the TM-122 radar detector work?

The dual zone microwave-based technology allows detection of all motor vehicle and bicycle movement and presence, in a single system. Specifically designed to replace sub-surface inductive loop detectors and existing MVDs where there is stop-start traffic, the TMA-122 incorporates two relay outputs, one for the 40m zone and a presence detector for stopped vehicles.

These can be N/O (normally open) or N/C (normally closed). One activates when a vehicle moves in a 40m area before the traffic signal pole. The second relay activates when a vehicle moves or stops in an adjustable area at the stop line.  Unlike other detectors, there is no software required for setting up the detector. The presence zone is set simply by selecting the size of the stop line zone, using a simple encoder switch on the rear of the detector. Presence time-out can also be easily set with a switch.

Approved by TOPAS, the TMA-122 has a detachable cable at the bottom for simple change out. It is maintenance-free, with no lens cleaning required or C&T Technology supply the detector ready to install, including cable, fixing support, screws and bolts (works 12-60v DC or 10-42 AC @ 50hz). calibration.

And how does the TMA-122 perform out there on the roads?

Scottish weather conditions can certainly be challenging. Now in use throughout Scotland, the TMA-122 detector has been shown to maintain its performance under the full spectrum of weather conditions. From the rare scorching day in Newton Mearns when the photographs in the second example were taken, to rain, frost, snow and fog, the accuracy and consistency of performance of these newly installed detectors has been maintained.

For busy urban spaces, and particularly Edinburgh, with its growing tram network, the benefit of above ground detection is becoming increasingly recognised.  When it comes to choosing between installing a conventional XYZ loop system with its invasive and costly roadworks and an externally applied radar detector the decision is simple. As an above-ground stop-line detection systems, the TMA-122 is certainly doing a great job at keeping Scotland moving.

“In my experience, after 60 installations the TMA-122 is proving to be a reliable and longer term, cost-effective option. I believe it is a viable alternative to the disruption of installing underground stop-line loop systems.”